Freeman presented a poster on the fusion between optical physics and chemistry at Research Expo on Thursday, April 14 (see abstract below and see all poster abstracts here).

“The nucleic acids in DNA strands functionalized to silver have been shown to have fluorescent properties, similar to a fluoroflore,” said Freeman. “This is due to the charge transfer effect; energy is given off as light when the electrons move between the orbitals of the atoms of the nucleic acids and those of silver. We want to understand why this works. It began as trying to understand nucleic acid-silver composites, but turned into, ‘Can we use this as a way to figure out how molecules bind to a surface?’”

Freeman, from South Carolina, knew she wanted to be an engineer. As a child, she loved to build computers, and pursued computer engineering as a result. However, she shifted away from it when she realized she really liked chemistry.

“My passion is in bio-detection,” said Freeman. “I like the fusion between electrical and chemical engineering – the interdisciplinary effect of looking at biosensors. There are two components: sensors are easily understood by science, but biology is difficult. I find this field to be challenging.”

Freeman says she chose UC San Diego because the school is dedicated to both engineering and medicine, and San Diego is a well-known hub for biotech. “I looked at the facilities offered, the collaboration opportunities.”

Freeman plans to complete a postdoc at UC San Diego before pursuing other job opportunities in the area.

Regarding Research Expo, Freeman says, “My goal is to get better communicating science. In addition to networking with industry professionals, I also love interacting with other students. We publish all this great research, and this is the one time we get to see all of our fellow graduate students in one place.”

Department: Electrical & Computer Engineering
Research Institute Affiliation: Graduate Program in Chemical Engineering
Faculty Advisor(s): Y. Shaya Fainman
Abstract
Plasmonic devices are of great interest due to their ability to confine light to the nanoscale level and dramatically increase the intensity of the electromagnetic field, functioning as high performance platforms for Raman signal enhancement. While Raman spectroscopy has been proposed as a tool to identify the preferential binding sites and adsorption configurations of molecules to nanoparticles, the results have been limited by the assumption that a single binding site is responsible for molecular adsorption. Here, we develop the simulated Raman correlation spectroscopy (SRCS) process to determine which binding sites of a molecule preferentially bind to a plasmonic material and in what capacity. We apply the method to the case of nucleic acids binding to silver, discovering that multiple atoms are responsible for adsorption kinetics. This method can be applied to future systems, such as to study the molecular orientation of adsorbates to films or protein conformation upon adsorption.
Industry Application Area(s)
Electronics/Photonics | Materials | Biosensing

Posted by Unknown at 9:40 AM No comments:

Research Expo 2016 Wrap-Up: And the poster awards go to…

Research Expo 2016 took place Thursday April 14, 2016 and featured a poster session, faculty talks, an awards ceremony and networking reception. The event was a success, thanks to our attendees, judges, sponsors and promotional partners, and the Jacobs School faculty, alumni, staff, and students. Students competed for a grand prize and the Rudee Outstanding Poster Award, as well as for the best poster award in each department. And the winners are…


The winners of the Best Poster Awards for each department are:


60. ENGINEERED 3D SKELETAL MUSCLE-ON-A-CHIP AS AN IN VITRO TOOL

78. FIBBING TO ALLEVIATE CONGESTION IN WAN AND DATA CENTER NETWORKS

Stay tuned for more photos from Research Expo 2016!
Posted by Unknown at 1:56 AM No comments: 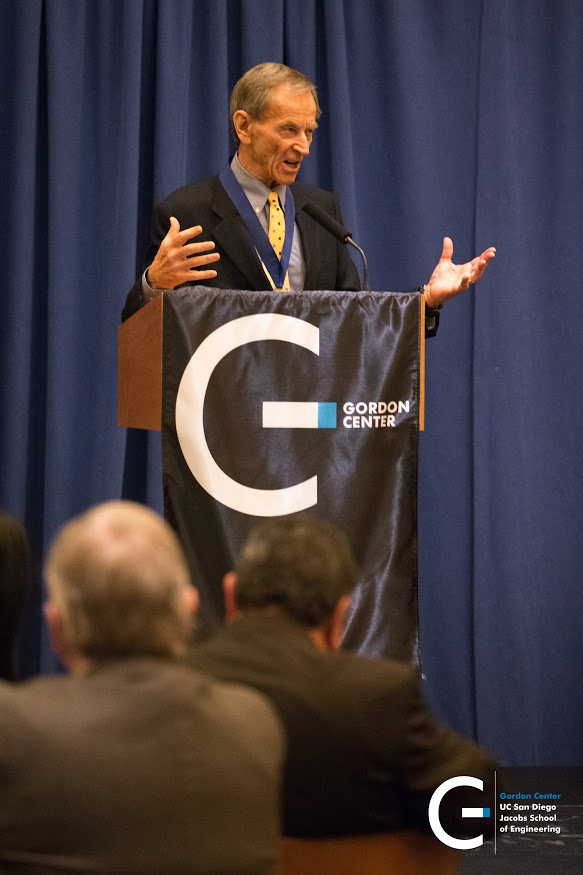 “You all are at the right place at the right time, the combination of information and energy... [creates] unlimited potential for the world,” Linden Blue, the co-owner and vice chairman of General Atomics, speaks to the room after accepting the Professional Gordon Engineering Leadership Award.

Dean Albert P. Pisano introduced Blue, recognizing him for his inspirational engineering leadership and technical contribution to aviation and energy. Blue is the epitome of an engineering leader; possessing technical innovation, engineering excellence, and corporate leadership, Blue is credited for building one of San Diego’s most prestigious engineering companies - General Atomics. The company is one of the world's leading resources for high-technology systems, including nuclear fuel systems, remotely operated surveillance aircraft, airborne sensors, and advanced electronic, wireless and laser technologies.

“The use of nuclear energy started General Atomics,” Blue explains. “President Eisenhower's peace initiative held that the awesome energy potential of nuclear power could be used both peacefully and productively, and that's how General Atomics was founded. We’ve made 67 ISO reactors that have been sold all over the world in universities and hospitals.”

Aside from helping oversee a diverse technology portfolio, Blue is currently working to develop the Energy Multiplier Module, EM2, which is a small nuclear power generator that converts spent nuclear fuel into energy. Bloomberg News recently called EM2 one of the top 8 methods to saving the planet.

The awards were presented to the undergraduate and graduate students by Gordon Center board members Rusty Sailors, CTO/President of LP3, Carmela Keeney, Executive Director of SPAWAR and Dr. Ebonee Williams, Executive Director of Gordon Center. The Gordon Center’s annual Engineering Leadership Awards recognizes outstanding student, industrial/government/military and academic leaders who have demonstrated excellence in leadership, engineering ability, communication skills and teamwork. In addition to undergraduate and graduate opportunities, the California State Summer School for Mathematics and Science (COSMOS) provides high school students the opportunity to explore and work on engineering projects in a four-week summer program. The best teams are awarded engineering leadership awards by the Gordon Center in a ceremony which takes place in August.


Through its Gordon Scholars Program and Engineering Leadership Awards, the Center identifies and celebrates talented individuals with leadership potential. In addition, the Center exposes students to the advice, experience and attitudes of proven engineering leaders through training events including workshops, leadership forums and summer programs. Winners receive a medal, membership in the Gordon Center Alumni Network and a monetary award. 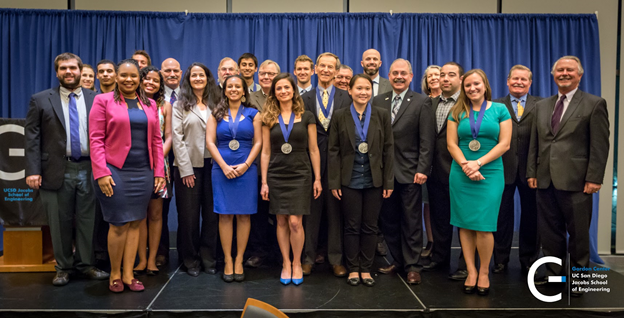 Recipients of the award are first nominated by mentors and department chairs. They are chosen through a competitive selection process by the Gordon Center Advisory Board. This year the graduate and undergraduate awards were presented to the following outstanding students for their contributions to engineering leadership.

Michael Barrow - Ph.D. Candidate, Computer Science & Engineering
In recognition of his leadership co-directing 8 teams of undergraduate researchers and for building an alliance between the School of Engineering and the School of Medicine for medical computer vision research.

Jessica Ungerleider - Ph.D. Candidate, Bioengineering ( Buzz Woolley recipient)
In recognition of her technical contributions to the designing of nanoparticles for treating disease and for building community among graduate students.

Elide Pantoli - Ph.D. Candidate, Structural Engineering
In recognition of her leadership on large-scale structural testing design and analysis and for educating the next generation of structural engineers.
Undergraduate Awards

Amanda Beck - Bioengineering
In recognition of  her technical contribution to statistical analysis of EMG signals and to leadership of project teams.

Ryan Collins - Electrical & Computer Engineering
In recognition of his vision for the Institute of Electrical and Electronic Engineers (IEEE), increasing technical competition participation, and fostering engineering community through outreach.

Denali Dahl-Nanoengineering
In recognition of her leadership of multidisciplinary engineering teams in Fiji and the Philippines and in her commitment to humanitarian engineering.

Neel Parekh - Bioengineering
In recognition of his leadership in multiple research teams and his commitment to the development of low-cost medical devices through UCSD’s Engineering World Health.

Posted by E&L Marketing at 4:00 PM No comments:

Engineers turn out in force for Triton 5K 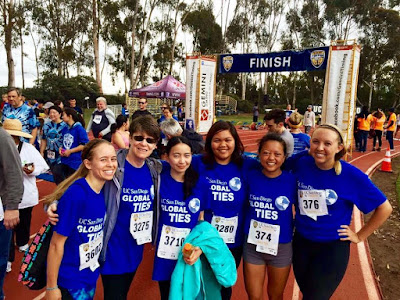 Jacobs School of Engineering students, alumni, faculty and staff achieved an elusive trifecta at this year's Triton 5K race.  The Department of Computer Science and Engineering fielded the largest overall team--226 strong. The team also raised the most funds: $6,334. It's named Race Condition--a play on words on a computer science term that means a behavior that happens when a device or system tries to perform two or more operations at the same time, but can't because of its very nature. Some members of the team flew from as far as New York. Meanwhile, the Department of Electrical and Computer Engineering fielded the largest campus team-- 82 strong.

The Triton 5K raises funds for scholarships for UC San Diego students. This year, in addition to the race run on campus, teams also ran in China, Taiwan and the United Kingdom. The event is sponsored by a number of organizations and alumni.

Here is a snapshot of some members of Race Condition: 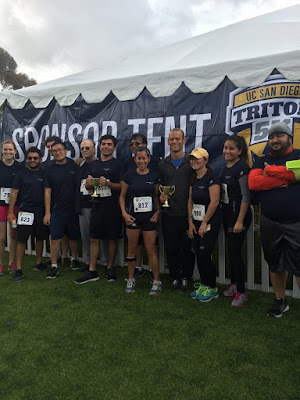 And some snapshots from the Department of Electrical and Computer Engineering, including Chancellor Pradeep K. Khosla: 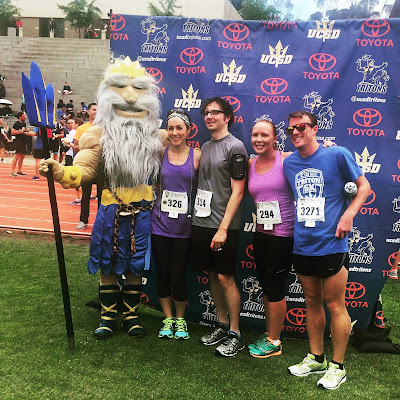 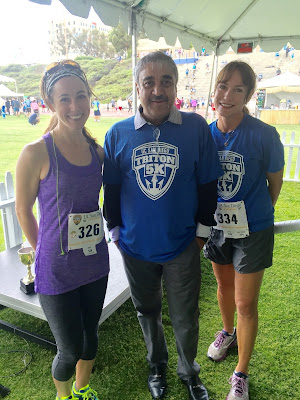 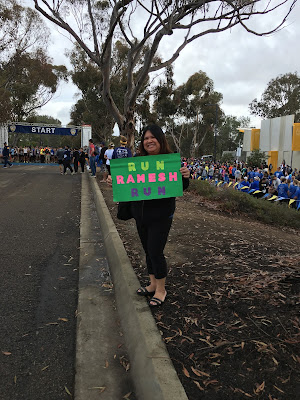 Posted by Ioana Buibas at 3:33 PM No comments:

Shaking and surfing at Triton Day


UC San Diego is home to the world's largest outdoor shake table (or earthquake simulator) and to some serious surfing--including one of the nation's top college surfing teams and to a team that makes surfboards out of algae.

So this year, students admitted to UC San Diego got a chance to surf during a simulated earthquake, all while wearing an Occulus Rift virtual reality headset. Students heard a warning that a 9.9 earthquake has taken place and a giant tsunami is nearing the shore.

The experience was very popular. According to the San Diego Union-Tribune:

“I thought I was going to fly off of it,” 17-year-old Jasmine Hassan said afterward. “I’ve never experienced virtual reality in that kind of immersive environment. I just think it shows how cutting-edge UCSD is, and you can see the way they apply the research that they do, it’s applicable to everything people are doing in modern-day life.”

Near the shakeboarding experience, students from the UCSD Seismic Outreach Program allowed campus visitors to "make their own earthquakes" by jumping on a mat equipped with an accelerometer, connected to a computer that made a building made of K'Nex shake on a small shake table.

On Library Walk, many of the school's student organizations had come out to get prospective students excited about everything the campus has to offer.

Posted by Ioana Buibas at 12:47 PM No comments: