On Monday, Nov. 20, Charles University in Prague awarded Wang an honorary doctorate in Natural Sciences for his "outstanding academic achievements in the field of Analytical Chemistry."

And on Friday, Nov. 24, the Senate of the Iuliu Haţieganu University of Medicine and Pharmacy in Cluj-Napoca, Romania, also conferred an honorary doctorate on Wang in recognition of his "prodigious merits in the field of Electrochemistry."

Here are photos from the ceremony at Charles University in Prague: 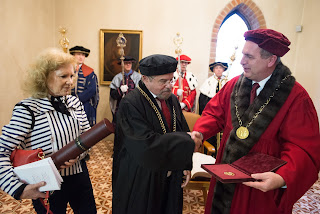 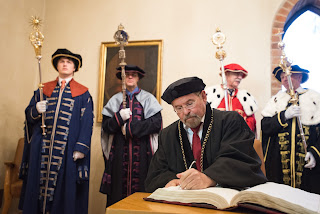 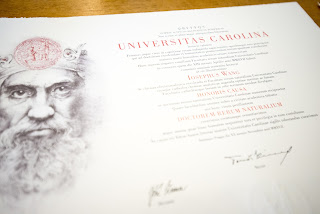 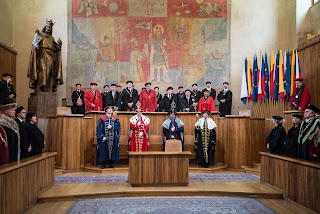 Here are photos from the ceremony at the Iuliu Haţieganu University of Medicine and Pharmacy in Cluj-Napoca, Romania: 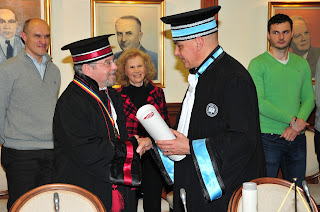 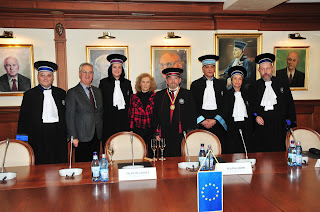 Posted by Liezel Labios at 2:58 PM No comments: 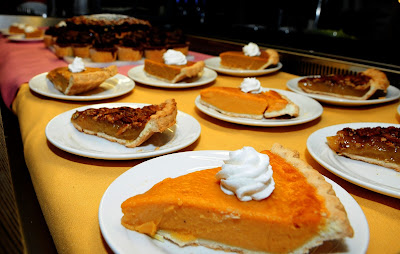 Still looking for a recipe idea for your Thanksgiving pie? Janelle Shane, who got her PhD in electrical engineering at the Jacobs School, is here to help--well, soft of.
Shane has trained a neural network, a type of computer program that learn by looking at examples, to generate recipe titles, based on a database of 2237 sweet and savory pie recipes.
The results didn't disappoint.
The neural network git creative and suggested Strawberry Ham Pie and Turkey Cinnamon Pie, as well as Impossible Maple Spinach Apple Pie--whatever that is.
Other suggestions were more on point, including Baked Cream Puff Cake, Eggnog Peach Pie and Fried Pumpkin Pie.
For more fun pie names and other neural network merriment, check out Shane's blog: http://aiweirdness.com/

So Bon Appetit! And Happy Thanksgiving!
Posted by Ioana Patringenaru at 11:52 AM No comments:

The image of a crystalline dendrite seen here is the winning entry of the first annual Jacobs School of Engineering Art Contest. The contest provided engineers at UC San Diego an opportunity to share their research through original artwork. Submissions included photography, microscopy images, computer graphics illustrations, journal cover art, and other media. Kaufmann received a $100 Visa gift card for his winning entry, which is featured on the Jacobs School website and social media.

Kaufmann works in the lab of nanoengineering professor Kenneth Vecchio, where he makes and studies metal alloys made of crystalline dendrites. Kaufmann captured the image of one of these crystalline dendrites using a method called transmission-mode Scanning Electron Microscopy (tSEM). This method produces images of a sample by bombarding the surface of the sample with a beam of electrons. The interactions between the electron beam and the sample then produce signals that relay information about the composition and surface features of the sample.

For more on Kaufmann's research, read the story here.

Stay tuned to see entries that received an honorable mention. These images will also be shared on the Jacobs School Facebook, Instagram and Twitter accounts in the coming weeks.
Posted by Liezel Labios at 9:00 AM No comments:

Matthew Wnuk joined the Navy in 2004 and was trained as a sonar technician at the Anti-Submarine Warfare base in Point Loma. Nine years of active duty service, an undergraduate degree, several internships and a job later, and he’s still using the skills he learned in that position, this time as an electrical engineering master’s student at UC San Diego.

Being a sonar tech has two components—electronics and intelligence—and Wnuk had the chance to serve in both capacities during his time in the Navy, which took him to Japan, the Pacific Islands and just about everywhere in between.

“For the electronics part, you trouble shoot and fix and maintain electronic suites,” Wnuk said. “If a capacitor goes bad you have to do an electronic survey of the board to figure out what went wrong. And the other side of it is intelligence—either collecting or analyzing intelligence—which is what I did my last three years, doing the analysis on all the intelligence sent in from the fleet.”

Being a sonar technician piqued his interest in electronics, so when he transitioned out of active duty, he decided to pursue a degree in electrical engineering at San Diego State University. He worked hard and excelled in the program, even serving as president of SDSU’s chapter of the IEEE honor society his senior year.

While earning his undergraduate degree, Wnuk put his military and academic experience to use through an internship with Northrop Grumman, conducting electromagnetic research with applications for UAVs. He also interned for NASA, testing circuitry for an optical receiver used on a LiDAR system for the Lunar Lander. After graduation he decided to pursue a career with the Navy’s Space and Naval Warfare Systems Center Pacific.

“At SSC Pacific, I’m doing electronic design of hardware for unmanned aerial vehicles and aerostats, which are giant blimps,” he said. “I’m also doing a little bit of software for controlling communications for UAVs.”

After just one year at SSC Pacific, Wnuk was ready to take on another challenge, and began his master’s degree in electrical engineering at UC San Diego while he continues to work. He’s focusing on machine learning, which is an area he thinks will have many applications in the defense sector.


“It’s been an incredible challenge,” he said. “Because the machine learning portion is more of a computer science background, which is something I didn’t have, it took about a quarter for me to get my feet on the ground. But I think I’m making good progress.”
Posted by Katherine Connor at 9:15 AM No comments:

Alan Adame is a master’s student in the computer science and engineering department at UC San Diego, studying computer science. He’s also a captain in the U.S. Army, preparing for a tour as a research scientist at the Army Cyber Institute at West Point University.

A West Point graduate himself, Adame was commissioned to the Army as a signal officer, and deployed to Iraq as a platoon leader in 2010, not long after earning his degree.

“My job there was basically to start getting everything ready so we could hand it over to the Iraqi Army,” Adame said. “The fiber optic cable, anything we dealt with as far as communications— if the Iraqi Army wasn’t familiar with it, we would train them.”

After he returned from Iraq, Adame was stationed in Ft. Bragg, N.C. with the 82nd Airborne Division of paratroopers. There, he was tasked with ensuring everyone in the division had the platforms and systems they needed to be able to communicate on the same network. All while jumping out of planes, of course.

“No matter what you do—cook, HR personnel, whatever your job is—you jump out of an airplane,” he said. “The 82nd Airborne is a Global Response Force—the country’s 911. When a disaster happens, we deploy there to help. It’s the best job in the world.”

He performed well enough in that role that he was selected to attend graduate school, and is in his fourth quarter of the computer science master’s degree program at UC San Diego. There is no jumping out of planes, but Adame said the curriculum is challenging.

“It’s hard. I didn’t think it was going to be this hard. From the military perspective, whenever you get to do this type of opportunity it’s seen like you get to take a break, but this is not like that,” he said. “It’s been really tough. What we’re learning is cool, but it’s challenging.”

He said the atmosphere reminds him of his paratrooper days in some ways, since he’s surrounded by people at the top of their field.

“Here, academically, everybody is really, really smart. You’re trying to hang with everybody so it’s challenging mentally. Where there, everyone is really good physically. Everybody is at the top of their game, is driven, is always trying to do the right thing and work hard.”

Adame has always been interested in computers and started programming at the age of 12, so the opportunity to work as a research scientist and instructor at the recently established Army Cyber Institute is an exciting one.

“The interesting part about it is that the Center was just stood up a few years ago, and the cyber branch within the Army is a recent addition as well," Adame said. "If you’re going to be an infantryman or artillery, you can find all these field manuals that say ‘This is how you do this, this is how you plan this operation.’ Basically, what the Army Cyber Institute is doing is putting together research so we can formalize that branch to establish these kind of standards.”

Posted by Katherine Connor at 8:20 AM No comments:

UC San Diego computer scientist Laurel Riek wants to put a robot in someone's home for six months.
"We want to build robots that can adapt to learn from and change with a person, not only throughout the week, but throughout the day," she says in this video for the journal Communications of the ACM.
Riek is the author of a review article titled Healthcare Robotics in the journal's November 2017 issue.
The full text of the article is available here: https://cacm.acm.org/magazines/2017/11/222171-healthcare-robotics/fulltext
She is a professor of computer science at the Jacobs School of Engineering at UC San Diego and a faculty member of the campus' Contextual Robotics Institute.
Her research goal is to enable robots to robustly solve problems in dynamically- changing human environments. Riek is particularly focused on problems in real-world, safety-critical healthcare environments, such as hospitals, homes and clinics. Her work tackles the fundamental and applied problems that make complex, real-world perception and interaction in these spaces so challenging for robots. Riek’s work draws on techniques from the fields of computer vision, machine learning, non-linear dynamics, and human factors to enable robots to autonomously perceive, respond, and adapt to people in the real world.
Posted by Ioana Patringenaru at 12:10 PM No comments: