We just published the latest issue of our Pulse magazine.  If you’d like to update how we deliver Pulse to you, please keep reading. You have the option to receive Pulse by email, mail or both.

Don’t forget to check out the online version of Pulse Fall 2015 on your desktop, tablet or mobile device and share your favorite article.

Posted by Unknown at 4:24 PM No comments: 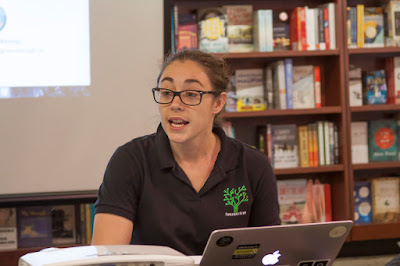 Computer science alumna Sarah Guthals showed off LearnToMod, the software that she and fellow computer science Ph.D. Stephen Foster developed, today at the UC San Diego Bookstore. The software allows students to learn computer programming while playing Minecraft.
Guthals demonstrated how students could create wands that generate giant digital explosions inside of Minecraft and that allow players to teleport inside the game.
After the event, Guthals signed copies of "Minecraft Modding for Kids for Dummies," the book she co-wrote with Foster and Lindsey Handley, a biochemistry Ph.D. at UC San Diego. Guthals, Foster and Handley co-founded ThoughtSTEM, a company dedicated to teaching children how to code. It offers everything from summer camps, to after school programs.
Below are some tweets about the event:

Posted by Ioana Buibas at 4:32 PM No comments:

From Cebu, Philippines, chemical engineering student Regina Caluya has focused her education and career towards making a strong social impact through science and engineering. At the age of 18, Regina emigrated to the States with her family in 2009 and enrolled at UC San Diego as a transfer student in 2013. At UCSD, Regina has been involved in Global Teams in Engineering Service (Global TIES) and the UC San Diego chapter of American Institute of Chemical Engineers (AIChe at UCSD), specifically the Chem E Car project to construct a small chemically powered car.

Regina enrolled in Global TIES last Spring and joined One Village Philippines (OVP), a team partnered with Gawad Kalinga’s (GK) Enchanted Farm to develop easily replicable, sustainable technologies to be adopted in rural communities in the Philippines, a country that is struck by approximately 15 typhoons annually. Regina has found it to be a very special opportunity to be a part of OVP and help GK’s mission.  “It’s been wonderful to gain experience and give back to your motherland,” said Regina. “My heart really goes into this. It was eye opening to be there… I was able to see the condition of my country and realized that we can do something to change or improve their condition.”

This summer, OVP brought the design for the second iteration of their solar street lamp back to the Philippines, where scavenged for the necessary materials and taught some of the local Filipinos how to replicate the lamp at GK’s Enchanted Farm. “We were humbled by their practical skills,” said Regina. “They were able to wire the poles faster than us. Even though as UCSD students we have a world class university education, there are still people who know better than us.”

After graduation, Regina hopes to work for a renewable energy company, but for her last year at UCSD, Regina sees herself continuing her work with AIChe and OVP. This year, OVP has plans to pursue a brand new sustainable project, possibly one that involves relieving the whole Enchanted Farm community’s reliance on the grid.

“Working with OVP really helped me realize what career path I want to take. This summer I’m working as a research intern for Global Energy Network Institute, and I’m writing an executive summary on the possibility of making the Philippines completely renewable (hopefully by 2030), including the possible mixes of renewable energy.”


To learn more about the Global TIES One Village Philippines Project, read here.
Posted by E&L Marketing at 4:01 PM 2 comments:

Wearless Tech, Inc., a San Francisco/San Diego startup with its roots in the University of California, San Diego’s Computer Science and Engineering department, was invited to showcase their first product – a wellness video baby monitor – in the first-ever White House Demo Day on August 4, 2015. The event was hosted by President Obama and brought in innovators from across the country, including the co-founders of Wearless Tech, Rubi Sanchez, Siva Nattamai, and UC San Diego computer science alumnus Pavan Kumar Pavagada Nagaraja, MS ‘15.
Nattamai and Sanchez first met at a hackathon where they had the idea for a baby monitor that could detect a baby’s heartbeat without any wearable sensors attached. After interviewing a number of parents, the pair realized that the need was greater – a monitor that can non-invasively detect the baby’s heart rate, respiration and temperature and then send an alert when something isn’t right. That’s when UC San Diego computer science and engineering graduate student Pavan Kumar, now an alumnus and currently employed as researcher in the Computer Science and Engineering Department, joined the team as a software developer. Together, the three co-founded Wearless Tech, Inc. and began work on what would become their first product – Cocoon Cam.
“Cocoon Cam is unique in that it is completely non-invasive,” said Kumar. “The hardware consists of a video camera with a passive infrared sensor, meaning that unlike other technologies, no microwaves are emitted. Instead, it gathers data from the camera and sends it to the cloud, where software analyzes the video.”
Once it receives the video feed, the software amplifies and quantifies the color changes in the baby’s skin and the movement of the baby’s chest. From there, a notification is sent to the parents’ smartphone app alerting them to changes in the baby’s heart rate, respiration and temperature.
Cocoon Cam can be pre-ordered beginning in October.
Wearless Tech is currently continuing its collaboration with UC San Diego and Weibel to conduct field patient studies in both clinical and in-home environments. In the future, the company plans to develop intelligent video camera systems that provide continuous, non-contact and non-invasive vital sign monitoring for Neonatal and Pediatric Intensive Care Units (NICUs/PICUs) and Emergency Rooms (ERs). The technology promises to reduce false alarms and alarm fatigue in critical care environments, and the team plans to test its efficacy through an NSF grant for which they applied in collaboration with UC San Diego’s Computer Science and Engineering and Pediatrics departments in early summer 2015. Other areas under development include post-surgery and eldercare monitoring as well as enhanced screening for security applications.
Interested in supporting Cocoon Cam? Visit https://www.cocooncam.com.
Read about Wearless Tech's journey to the White House here.
Posted by Unknown at 4:31 PM No comments:

To help ensure a low-carbon future, batteries will need to do more than charge faster, last longer and cost less — they will need to perform at the high voltages electric cars require. Two UC San Diego professors — nanoengineer Shirley Meng and physicist Oleg Shpyrko — are collaborating to address this challenge.

Their work in the new Sustainable Power and Energy Center was promoted in a recent ad launched by the UC San Diego Advertising Campaign. The ad is one of a series of ads showcasing the high-impact work of faculty throughout the campus.

The ad ran in the August 2 edition of the New York Times Education Life section.

Have you heard? UC San Diego will host the inaugural SDHacks competition October 2-4, 2015. We sat down with the event’s organizer, computer engineering student Ryan Hill, to get a sense of what SDHacks is all about:

Describe SD Hacks in your own words.

SD Hacks is an opportunity for undergraduates to try new things and learn by doing. It's where we encourage you to build anything and everything, with only your imagination stopping you. We've done everything we can to have top notch mentors and resources present - that leaves the students to simply work their magic. We expect everyone to leave the event with something built and something learned. And then, after the event, we hope the hackathon never really stops for them - hopefully we kindled something deeper, and our hackers keep learning and building whatever they can dream up.

Give us the details.


Are there any important dates we should know about?

Registration opened June 15th, and will be closing in late August.

Anything else we should know?

So far, there are nearly 1,500 students registered. We still have room for more – and we’re still looking for sponsors to offer prizes.