Students Enspire the next generation of engineers

More than 180 high school students came to UC San Diego on Monday, Jan. 27 for Enspire, an annual daylong event for students to learn about different engineering disciplines and how to fund their college education. The event, held at Price Center Ballroom East, was organized by the Triton Engineering Student Council.

Computer science professor Christine Alvarado kicked off the event as the keynote speaker. Alvarado discussed her research in supportive learning and emphasized the importance of not giving up, even if the field might seem too hard. 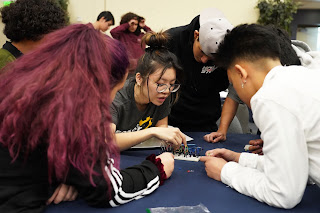 “It's not always easy to come into college studying engineering or computer science, but it can be super rewarding and you do not need experience coming in to succeed,” Alvarado said. “Many of our students who come into UCSD as computer science and engineering majors have never taken a programming class before.”

Financial aid counselor Rashinda Hutchinson took the stage next and spoke to students about the different types of aid packages. She also educated students on important deadlines for the FAFSA application, strongly encouraging them to start in October of their senior year.

After the presentations, the students were broken up into groups of six to participate in four 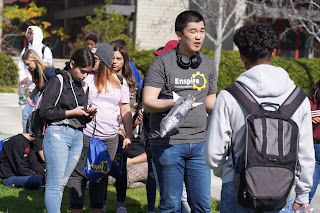 “We wanted to show students how to problem solve in interactive ways, without an instruction set,” Fu said. “We believe that the students did great and were pleasantly surprised about how many ingenious ways they solved issues.”

Isiah Encakado, a senior from Mountain Empire High School, came to the event to learn more about engineering opportunities at UCSD and interact with college students. He hopes to pursue a degree in computer science in college.

“So far, I’m really glad I came and everyone has been extremely welcoming,” Encakado said. “I am definitely learning new concepts and skills from these workshops”

According to Fu, the planning team, which consisted of three committee members and several board members, started preparing in the summer to go over big picture ideas and logistics. The hardest part: making sure all of the dates and numbers were set. 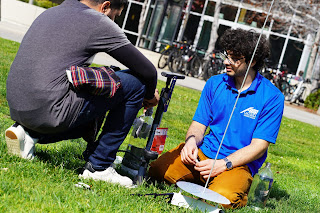 “We had some difficulty with getting the exact number of students and then telling the organizations we were working with how much they should bring for their activities,” Fu said. “We definitely learned a lot about the merits of finalizing attendance numbers early and then staying firm after.”
Fu’s favorite part about running Enspire is working closely with high school students during the interactive workshops.

“It really helped me realize why we worked so hard the many weeks before,” Fu said. “I loved seeing how the students worked together and what they were able to do.”

Posted by Katherine Connor at 4:04 PM No comments: