Meet Colin Zyskowski, a graduate student in computer music. Colin is Jesse’s right-hand man. We asked him, “What exactly do you do?”

I oversee the undergraduate staff, help maintain the equipment, assist classes with the tools, and I assist Jesse with his mountain of day to day tasks, including the website. We’ll have a new project demonstration and tutorial page up soon.

How did you end up in this position?

I worked with COSMOS over the summer teaching the music technology cluster in EnVision. That was my first exposure to the space. I had been looking for a place like that since I started my PhD at UC San Diego. I started volunteering the following quarter.

What is your goal?

I want to go into academia. I really like the atmosphere – being around a group of people on the cutting-edge of research.

Do you feel like your time at EnVision fits into that?

Oh absolutely. I like that it’s geared towards prototyping. I myself do a lot with hardware design.

What is your dissertation on?

Audio processing on mobile robotic networks - I'm researching various methods and applications for processing audio on groups of robots. These robots communicate with each other via wireless networks that I have built. The audio processing takes place on small computers or microcontrollers including the Raspberry Pi, Beaglebone Black, and a board that I designed and fabricated. The applications that I have focused on are musical performance, sound-source localization, dynamic audio spatialization, and positional determination. The network also has various functions, such as streaming audio, spatial mapping, group learning, and cooperative performance. I'm currently in my fifth year of the PhD program, and am planning to graduate in the spring of 2018. I work primarily with Miller Puckette (music) and Mauricio de Oliveira (mechanical engineering).

What else are you working on?

I also play music (guitar, drums, piano, bass), work as an audio engineer, build quirky electronic instruments, and do a lot of woodworking.

You can see some of Colin’s projects here. 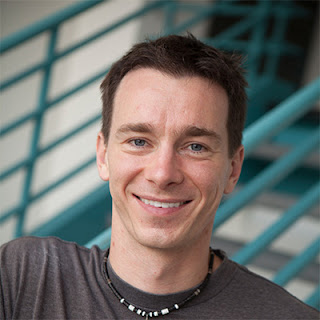 A University of California San Diego alumnus in computer science, Ross Tate (Ph.D. ’12), is one of two professors selected to receive the Dahl-Nygaard Prizes for 2017. The prizes are awarded annually by the Association Internationale pour les Technologies Objets (AITO).

Tate will accept the award at the 31st European Conference on Object-Oriented Programming (ECOOP) in June, set to take place in Barcelona, Spain. Now a professor of computer science at Cornell University, Tate will received the Dahl-Nygaard Prize for a “younger researcher who has demonstrated great potential for following in the footsteps of two pioneers in the area of programming and simulation.”

The late Ole-Johan Dahl and Kristen Nygaard did foundational work on object-oriented programming, particularly with the Simula language – widely considered one of the most important inventions in software engineering. Both Dahl and Nygaard died in 2002.

In highlighting his contributions, the association reached back to his landmark work while still a graduate student at UC San Diego. Published in 2011 at the Conference on Programming Language Design and Implementation (PLDI), Tate found that “although wildcards as in Java are undecidable in theory, programmers only use specific flavors of wildcards, which keeps them decidable in practice.”

According to AITO, the 2017 prize also recognizes that Tate has had a “strong industrial impact via his involvement in the production languages Ceylon (Red Hat) and Kotlin (JetBrains).” For Red Hat, Tate says his “role on the team is primarily as type-system advisor, making sure Ceylon's powerful features all work together cohesively.” He is also a type-system advisor to the JetBrains team, but notes that the “two projects are very different, both in how they operate, and in what they are working towards.”

After completing his Ph.D. in 2012, Tate immediately joined the Cornell faculty and continued his research on wildcards and type systems. According to AITO, he later proposed that “F-bounded polymorphism can be replaced by simpler concepts that were sufficient for the use that programmers made of generics in a large corpus” (as outlined by Tate and co-authors in a paper presented at PLDI 2014).

Tate also discovered that Java wildcards and Scala path-dependent types, in combination with implicit null pointers, make the languages unsound. That discovery was presented in 2016 at the Conference on Object-Oriented Programming, Systems, Languages and Applications (OOPSLA) in Amsterdam. The UC San Diego alumnus also wrote a popular article on the unsoundness issue for the Hackernoon website. In “Java is Unsound: The Industry Perspective,” Tate notes that the OOPSLA article was written for academics, so he drafted the popular article to discuss the issue – primarily focusing on Java –from the point of view of general developers in industry. (See related links below to read Tate’s Hackernoon article.)

AITO also awards the Dahl-Nygaard Prize to a “senior researcher with outstanding career contributions”. For the 2017 Senior prize, the association picked Google software engineer Gilad Bracha, citing his “outstanding work on many topics relevant to the field of object-orientation, including mixins, Java generics, Strongtalk and Newspeak.”

Posted by Ioana Buibas at 3:32 PM No comments: