It's dark! And it's the middle of the day!

Jacobs School students, faculty and staff members were among the hundreds of thousands of Americans who traveled to be in the path of totality (when the moon completely covers the sun) for the first total solar eclipse to cross the continental United States in 40 years. And they shared their pictures and videos with us.
Antonella Wilby, a Ph.D. student in computer science and robotics, left from Rosenburg, Oregon, at 3 a.m. to drive to the Ankeny National Wildlife Refuge, south of Salem, to see the eclipse.
She wrote:


This was my first time experiencing a total eclipse, and it really is true that a photo or a description does not do the experience justice. I'd read about the darkness, a sunset on every horizon, a sudden drop in temperature, but it is something that must be seen firsthand to truly be understood. While I had read that animals and birds would often go silent at the moment of totality, as the moon slipped into place in front of the sun the onlookers dotting the hills of the refuge erupted into cheers and applause, jumping up and down and turning in circles to fully experience the 2 minutes and 20 seconds of midday twilight that nature had gifted us. How incredible to be a part of this collective celebration of the beauty of nature.

She made this time lapse image of the total eclipse: 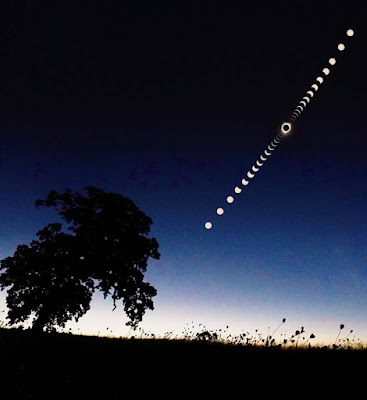 Computer science professor Bill Griswold saw the eclipse in Victor, Idaho, just east of the Grand Teton National Park. He gave us permission to share these pictures from the event: 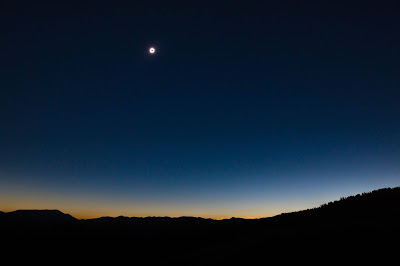 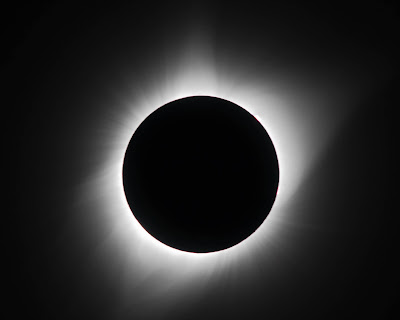 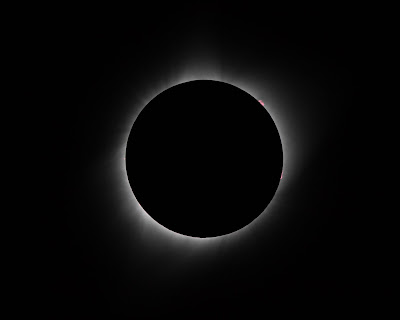 Staff member Ioana Patringenaru was vacationing with her family in Portland, Oregon. They left at 5 a.m. to drive to the small town of Stayton, just east of Salem. They arrived around 7:30 a.m. to find a small number of people from all around the nation camped out on folding chairs an blankets on a field in front of Regis High School, a private, Catholic campus. The field was conveniently located near a couple of grocery stores with public restrooms and coffee shops.
Cars with license plates from California and Oregon, as well as Nevada and even New Jersey, were parked curbside by the field. Some people had eclipse glasses. Others had fashioned pinhole viewers. A few people had professional-grade equipment. There was even one drone.
As totality approached, the air got colder and windy. Many went to fetch jackets from their car. Patringenaru only had her smart phone with her, so her still photographs couldn't quite capture the beauty of the event. But she caught on video the excitement of her youngest daughter, age 7.
"It's really happening! It's so dark. And it's the middle of the day!" she says.
Posted by Ioana Buibas at 2:02 PM No comments:

Email ThisBlogThis!Share to TwitterShare to FacebookShare to Pinterest
Labels: eclipse 2017

Gallium nitride (GaN) is a material that is used for radio and satellite communications in civil and military applications and in solid-state lighting such as LED bulbs. Researchers are also exploring GaN for use in high power applications such as power grids and electric vehicles. The market for GaN power devices is expected to reach $2.6 billion dollars by 2022. However, GaN is not an earth abundant material and only recently, small diameter GaN substrates have started to become available. Researchers have been growing GaN on foreign substrates for almost 5 decades, but the quality of the grown materials is compromised, especially on the standard microelectronics substrate, silicon (Si), which is over 1000 times cheaper than GaN substrates. The origin of the problem is a classical one: high quality material deposition is usually carried out near 1,000 degrees Celsius, but when dissimilar materials are cooled down to room temperature, their contraction can be disproportionate, resulting in the formation of cracks and material failure. This is exactly what happens when GaN is grown on Si. And because the crack severity depends on the thickness of the layers, the thickest pure and semiconductive GaN layer that can be grown on Si is 4.5 micrometers thick — too thin to provide good use of GaN for high power (kilovolt-scale) applications which require much thicker layers (10 microns or more).

Now researchers at the Integrated Electronics and Biointerfaces Group at UC San Diego led by electrical engineering professor Shadi Dayeh have solved this classical problem of thermal mismatches in the growth of dissimilar materials. In an article published on Aug. 21 in Advanced Materials, they combined fundamental crystal properties of GaN and geometrical effects to deflect strain from the crystal planes that usually crack under stress to the surface facets that can freely expand and contract in response to stress. By doing so, they were able to grow crack-free 19-micron-thick layers of GaN on Si — thicker than what’s needed for high-power applications. In the resulting structures, both GaN and Si had exposed surfaces to enable them to move, twist or “tango” together without cracking despite their thermal mismatch.

Thick layers also allowed the crystal defects — threading dislocations — to reduce from commonly achieved 108 – 109 per centimeter squared on Si to 107. And with the high material quality, Dayeh and his team demonstrated the first vertical GaN switches on Si. “This is the result of nearly four years of diligent efforts by graduate student Atsunori Tanaka, who learned and quickly excelled in the GaN metal organic chemical vapor deposition here at UC San Diego,” said Dayeh. “Our graduate students go through a full cycle of rigorous training in all aspects in electronic materials and devices and are prepared to tackle the greatest challenges in this area. A group of very talented students including Atsunori Tanaka, Woojin Choi, who fabricated the vertical switches, and Renjie Chen, who did the electron microscopy, have teamed up to complete the research,” Dayeh continued. Based on this work, Dayeh received funding in July from the National Science Foundation to realize a monolithically integrated GaN power converter on Si.

The growth, device fabrication and characterization were performed at UC San Diego and the electron microscopy was performed at the Center for Integrated Nanotechnologies (CINT), a Department of Energy Office of Basic Science user facility that provides access to top-of-the-line equipment under a user proposal system.
Posted by Liezel Labios at 2:17 PM No comments:

Darren Chen, a Ph.D. student in computer science at UC San Diego, had just landed in Japan when he saw ads in the subway for the competition he was going to take part in. "I realized it was a big deal," he said. He might even have panicked a little, he admitted.
In fact, the competition, called the RoboCup, brought more than 10,000 spectators and competitors to Nagoya, Japan at the end of July. The event, which is broadcast on Japanese TV, was celebrating its 20th anniversary.
Chen was part of a team of Ph.D. students from the Contextual Robotics Institute here at the Jacobs School that was taking part in the event's RoboCup @ Home challenge. It was UC San Diego's first time taking part in the competition.
In the @ Home challenge, 10 universities from around the world compete to complete a series of tasks by programming and training a Toyota Human Support Robot. The UC San Diego team had to sort groceries and help a person carry grocery items.
In addition, they faced a task to qualify. On the fly, they had to program the Toyota robot to autonomously navigate and map out a room without bumping into people and objects. The robot also had to be able to obey verbal commands in a noisy environment.
But the team's worst foe turned out to be the venue's WiFi. When 10,000 people were using the same radio band, it became difficult for the robot to communicate with other computers quickly.
The researchers enjoyed the experience of participating in the competition, and look forward to continuing to build assistive robots in the future.
In addition to Chen, the team working on the RoboCup @ Home challenge included   Angelique Taylor, Priyam Parashar  and Ruffin White as well master's student Jaskaran Virdi from the research groups of computer science professors Laurel Riek and Henrik Christensen. Christensen is the director of the Contextual Robotics Institute.
More info: http://jacobsschool.ucsd.edu/news/news_releases/release.sfe?id=2268


Posted by Ioana Buibas at 2:24 PM No comments:

Watch Jacobs School alum Iman Sadeghi demonstrating how you can build a 3D avatar from just one 2D picture by using software from Pinscreen, the company where Sadeghi is VP of engineering.
The technology is powered by neural networks and GPUs.
The Pinscreen demo starts around the 50:30 mark.
The 3D avatar can be used in VR environments. It is expressive and reflects different light conditions.

Posted by Ioana Buibas at 3:47 PM No comments: