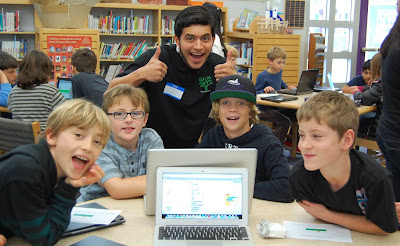 ThoughtSTEM, LLC, a San Diego-based company teaching computer science skills to students ages 5 to 18, has received a $330,000 Small Business Innovation Research grant from the National Science Foundation. ThoughtSTEM is most well-known for being the first company to release a Minecraft Modding software, LearnToMod, that allows kids as young as 5 to reprogram the popular video game, Minecraft.

“Thanks to the NSF, we are now going to be able to reach more students in different countries with different interests," Handley said. "The same experience students have had in our classrooms will soon be available online to both students... and adults. We're really interested in sharing our educational tools with more adults so they can help us reach more kids.”

The mission of ThoughtSTEM is to find every student interested in understanding how computer programming works and teach them in a context they can understand - video games. ThoughtSTEM has taught over 7,000 students in San Diego and over 100,000 students online.

This grant is allowing us to accelerate our development of computer science educational products for students who we are looking for new ways to interact with their favorite video games," Foster said. "Our students in San Diego have really enjoyed our approach, and we are excited to now be able to share it with other areas.”

Antonio Sanchez, a professor of mechanical and aerospace engineering at UC San Diego and an alumnus of the Jacobs School of Engineering himself, gave incoming freshman in the Summer Engineering Institute some pearls of wisdom as they begin their engineering careers. He and some of the graduate students in his lab put their heads together to create a list of 10 things that new Jacobs School students should know, and the advice is too good not to share. So, without further ado:

1)      Be proud. Living in San Diego, we have the sun and weather and can take for granted that we have UC San Diego here. UCSD is one of the best universities in the entire world. The Shanghai Ranking [Academic Ranking of World Universities] lists it as No. 15 in the world. Then certain fields like mechanical engineering, my department, is ranked No. 4 in the world-- you get an idea of the place you are in.

2)      Be prepared. College is hard. It’s different than high school—you need to learn at a different depth. And the pace is different—UC San Diego is on a quarter schedule, so you only have 10 weeks. If you fall behind, there’s no way to catch up.

3)      Go to class. There are many good reasons why you should do that—your parents or you are paying for it. But there’s an even more important reason: as engineers, the rest of your life will be a nonstop process of learning. The big difference is now, here, there will be someone telling you what’s important and what’s secondary. Once you graduate you’re on your own and learning becomes much harder. You have very educated professors trying to teach you things—go to class, really.

4)      Don’t take shortcuts. The engineers who are building airplanes, bridges or computers, they don’t cheat. If they did, the airplane or whatever would fall. Please don’t cheat. Do the honest work. It’s much better to get a ‘C’ than to cheat. Be professional and you’ll be treated as a professional.

5)      Be patient. I was looking at your projects and it’s clear you will be great engineers one day. You’re here to build new cars, new engines, new computers, new software…. But the truth is you’re not going to see much of that at first. It’s all going to be math and chemistry and fundamental science. And at one point you might be wondering why it is that you’re not building airplanes? You’ll get there. Those building blocks are really necessary to make sure you learn in depth.

6)      Make the most of these resources. You’re paying a lot of money, and UCSD has these labs and computers and I think one thing students don’t use that much is office hours. An average professor charges between $500 and $1,000 an hour as a consultant—that’s free to you! You have someone waiting in their lab or office to meet with you—go ask questions. And TA’s have office hours too and are sometimes more knowledgeable on the course than the professor. Go to office hours, you’re paying for it.

8)      Broaden your horizons. There is life beyond engineering. For electives, most people do something easy. I say challenge yourself—take Chinese, take sign language, study medieval history, whatever. Do something out of your comfort zone. Study abroad—we’re making an effort to make those programs more accessible for you. By my accent you know I’m from Spain, but I studied abroad as well and it really changed my life. You get to challenge yourself these four years, so broaden your horizons.

9)      Embrace a professor. One day you’ll need a professor to write a letter of recommendation, so take time to develop a relationship with a professor. That’s important to your future success.

10)  Have fun! Remember that you’re here to get an education to become an engineer, but you’re surrounded by beautiful, brilliant people, so socialize. Don’t forget that. At the same time, you’re an adult—you have to be responsible. Be safe.


Posted by Katherine Connor at 3:58 PM No comments:

More than 100 incoming freshman participated in the five-week residential Summer Engineering Instititue at the Jacobs School of Engineering this summer. The students took courses that count toward their degree, received support in transitioning from high school to college-level curriculum, familiarized themselves with the UC San Diego campus, and made friends, all in short order.

The second part of the Institute, run by the IDEA Engineering Student Center, included designing a hands-on final project in teams. The students demonstrated their projects to family, friends and peers at a closing ceremony on Sept. 7.

Here are just a few samples of the projects the incoming freshman students were able to conceptualize, design and build in less than three weeks. 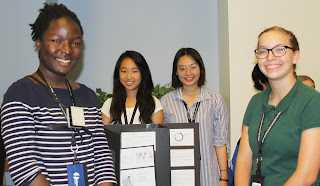 The sleep apnea tracker uses an accelerometer inside a small case worn around the chest to monitor the user's breathing. If motion exceeds a certain threshold, it registers as breath. If no breath is taken within a 10 second period, the device alarms and buzzes, waking the user and alerting them that they stopped breathing normally. 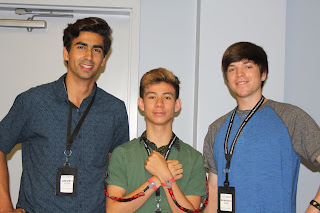 Microphones attached to small wrist and back straps monitor noise, and buzz when they register noise over a set level. This lets the user know that they need to pay attention in the direction of the buzz. The system is useful for anyone hard of hearing, or for those listening to music or wearing headphones who may not hear ambient sounds they need to react to. 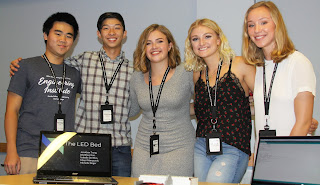 
The LED Bed is a night light that shines from under the user's bed, triggered by a pressure sensor. Instead of disturbing roommates or children by plugging in and turning on lights, this night light knows when the user is in or out of bed based on weight. It can be timed to go on for a certain number of minutes-- if the user gets up to go to the bathroom at night, for example, it will stay lit for 10 minutes, and automatically turn off after that. A light sensor in the Arduino will shut off the device during the day. 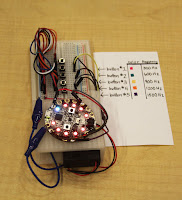 
The guitar tuner listens for the selected frequency, and LED lights glow the indicated color when the correct frequency is detected. 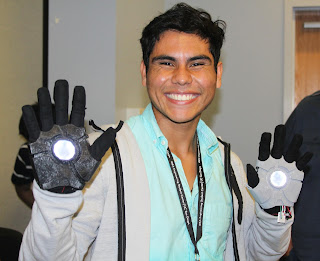 
These students built two glowing Iron Man hands and a face mask as part of a do-it-yourself kit. The 3D-printed components have accelerometers inside, so the embedded lights glow when the hands or face move. Buttons-- programmable in Python-- allow for different pulses and colors of light to shoot from the hands and eyes. The students created this kit to be a hands-on activity to help children engage with engineering principles. 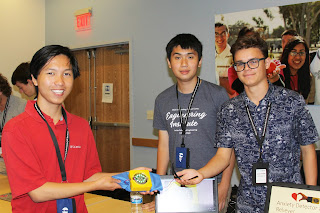 This wearable device monitors the user's heart rate, calibrating to his or her average beats per minute. The LED lights glow red if the heartbeat exceeds a certain threshold, since elevated heart rate is one sign of anxiety. The lights on the device then blink in time with a slower breathing pattern-- the user tries to sync their breath with the lights to calm down. The device turns green when they've returned to their normal heart rate.


Posted by Katherine Connor at 5:20 PM No comments: