Jacobs School Research in the News: Science Highlights from 2017

A new recipe for Martian bricks. Soft robots that walk on rough terrain. Combining squid ink and ultrasound to make a pain-free gum disease probe. These are among the science stories from the UC San Diego Jacobs School of Engineering that made headlines in 2017. Here is a roundup of the year's top science news hits:

New Blood Test Could Help Detect and Locate Cancer Early On
Bioengineers at UC San Diego have developed a new blood test that could detect cancer—and locate where in the body the tumor is growing. By screening for particular DNA signatures from both cancer cells and normal cells in the body, researchers discovered a new clue that indicates not just the presence or absence of a tumor, but also where it resides. The proof-of-concept study could provide a way to diagnose cancer early on without having to do invasive surgical procedures like biopsies.

New Nano-Implant Could One Day Help Restore Sight
A team of engineers at UC San Diego and La Jolla-based startup Nanovision Biosciences Inc. have developed the nanotechnology and wireless electronics for a new type of retinal prosthesis that brings research a step closer to restoring the ability of neurons in the retina to respond to light. The researchers demonstrated this response to light in a rat retina interfacing with a prototype of the device in vitro.

Engineers Investigate a Simple, No-Bake Recipe to Make Bricks From Martian Soil
Explorers planning to settle on Mars might be able to turn the planet’s red soil into bricks without needing to use an oven or additional ingredients. Instead, they would just need to apply pressure to compact the soil—the equivalent of a blow from a hammer. While proposals to use Martian soil to build habitats for manned missions on the planet are not new, this is the first that shows astronauts would need minimal resources to do so.

Nano Fiber Feels Forces and Hears Sounds Made by Cells
Engineers at UC San Diego have developed a nanosized optical fiber that's sensitive enough to feel the forces generated by swimming bacteria and hear the beating of heart muscle cells. It can detect forces down to 160 femtonewtons and sound levels down to -30 decibels. Applications of the device include measuring bio-activity at the single cell level, or an ultra-sensitive mini stethoscope to monitor cellular acoustics in vivo.

3D-Printed Soft Four Legged Robot Can Walk on Sand and Stone
Engineers at UC San Diego have developed the first soft robot that is capable of walking on rough surfaces, such as sand and pebbles. The 3D-printed, four-legged robot can climb over obstacles and walk on different terrains. The robot could be used to capture sensor readings in dangerous environments or for search and rescue.

Researchers Find Computer Code That Volkswagen Used to Cheat Emissions Tests
An international team of researchers has uncovered the mechanism that allowed Volkswagen to circumvent U.S. and European emission tests over at least six years before the Environmental Protection Agency put the company on notice in 2015 for violating the Clean Air Act. During a year-long investigation, researchers found code that allowed a car’s onboard computer to determine that the vehicle was undergoing an emissions test. The computer then activated the car’s emission-curbing systems, reducing the amount of pollutants emitted. Once the computer determined that the test was over, these systems were deactivated.

Featured in The New York Times and CNET

Low-Cost Smart Glove Converts Signs of American Manual Alphabet to Text
A new smart glove wirelessly converts signs of the American Manual Alphabet into text and controls a virtual hand to mimic sign language gestures. The device, which engineers call “The Language of Glove,” was built for less than $100 using stretchable and printable electronics that are inexpensive, commercially available and easy to assemble. While the glove is capable of gesture recognition, researchers at UC San Diego are developing the glove to be used in a variety of other applications ranging from virtual and augmented reality to telesurgery, technical training and defense.

Drug-Delivering Micromotors Treat Their First Bacterial Infection in the Stomach
Nanoengineers at UC San Diego have demonstrated for the first time using micromotors to treat a bacterial infection in the stomach. These tiny vehicles, each about half the width of a human hair, swim rapidly throughout the stomach while neutralizing gastric acid and then release their cargo of antibiotics at the desired pH. This micromotor-enabled delivery approach is a promising new method for treating stomach and gastrointestinal tract diseases with acid-sensitive drugs, researchers said.

New Dental Imaging Method Uses Squid Ink to Fish for Gum Disease
Squid ink might be a great ingredient to make black pasta, but it could also one day make getting checked for gum disease at the dentist less tedious and even painless. By combining squid ink with light and ultrasound, researchers have developed a new dental imaging method to examine a patient’s gums that is non-invasive, more comprehensive and more accurate than the state of the art.

This Soft Robotic Gripper Can Screw in Your Light Bulbs For You
How many robots does it take to screw in a light bulb? The answer: just one, assuming you’re talking about a new robotic gripper developed by engineers at UC San Diego. The engineering team has designed and built a gripper that can pick up and manipulate objects without needing to see them or be trained.  The gripper not only can twist and sense objects, it can also build models of the objects it’s manipulating. This allows the gripper to operate in low light and low visibility conditions, for example.

Posted by Liezel Labios at 7:30 AM No comments: 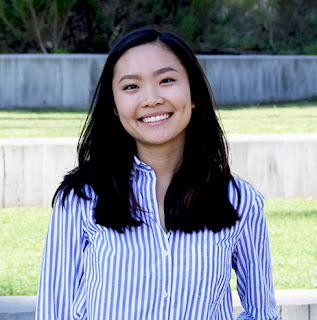 Kristine Khieu might be studying the spine, but she has her sights set on space.

The fourth year bioengineering undergraduate at UC San Diego was one of six students nationwide selected to receive a prestigious Universities Space Research Association (USRA) scholarship for her research on the effects of a zero-gravity environment on spinal muscles. Khieu was also commended for her science, technology, engineering, art and math (STEAM) outreach efforts.

USRA awards scholarships to undergraduate students who tackle challenging scientific questions in the areas of space research and exploration, particularly astrophysics and astronomy, and create technologies and solutions that positively affect people’s lives.

“My primary research interest is in astronaut physiology—how our bodies change in space,” said Khieu, who works in Alan Hargens’ Clinical Physiology Lab at the UC San Diego School of Medicine. “I actually traveled to the Johnson Space Center in Houston, Texas and got to help test some astronaut subjects.”

Khieu plans to apply to medical school, but said having an engineering background will prove useful in the medical field and beyond.

“I love my education through bioengineering— especially through the lens of medicine— because I think most doctors don’t have that kind of engineering perspective and it’s such an advantage to have a different way of thinking to approach medicine,” she said. “I have a dream of becoming a flight surgeon—basically the doctor for astronauts—because they mesh engineering and medicine. They not only study the human body in space or in extreme environments, but they also study the engineering behind devices that keep these people alive.”

Outside of classwork and lab work, Khieu finds time to serve as president of the Tritons for Sally Ride Science club at UC San Diego, focused on STEAM outreach to engage the next generation of innovators.

“Sally Ride was the first female American astronaut, taught physics at UC San Diego and is someone I looked up to even before coming here,” Khieu said. “This foundation was started by her. She was such a role model for young girls while she was alive, and even to this day. My work is to help continue that legacy.”

Khieu was awarded the Frederick Tarantino Memorial Scholarship Award, a $4,000 scholarship in memory of Tarantino, a former USRA president and CEO.
Posted by Katherine Connor at 10:09 AM No comments:

A startup that emerged from the UC San Diego electrical and computer engineering department took first place and $10,000 this week in the latest competition of the Triton Innovation Challenge, an annual UC San Diego business competition for environmentally focused technologies.

The team, BIC LIDAR, is working on compact, solid state lasers for LIDAR applications. For this competition, the team focused on their LIDAR system’s possible applications in wildfire detection in forestry. However, autonomous vehicles are among applications of this technology that have large potential markets.

The researchers are aiming at size and price points that are significantly more compact and less expensive than today’s LIDAR technologies. A slide from BIC LIDAR's presentation suggests they are going for $10/device compared to LIDAR currently on the market, which comes in at more than $200/device.

“We demonstrated the new laser based on completely new physics that enables us to surpass a fundamental technological barrier in LIDAR technology. With this laser, we can remove all mechanical components, shrink the size of LIDAR systems into the nano-scale, and increase the speed at least six orders of magnitude,” said Bahari.


Want more details? The key technology: bound states in the continuum (BIC) lasers. They offer unique properties, including tunable emission angle, emission wavelength, and potential for high-power applications. The team is developing a tunable, chip-level, solid state BIC laser for LIDAR that could be deployed in many different applications including wildfire detection and autonomous vehicles. (Read the press release on related related 2017 Nature paper.)

The solid state LIDAR team was one of the inaugural cohort of startups to be accepted into the technology accelerator launched by the UC San Diego Institute for the Global Entrepreneur in May 2017.

Second place in the same competition went to E-Way, which is a collaboration led by Wei Huang, who is a Jacobs School materials science graduate student in Joanna McKittrick’s lab, and Alejandro Conde PhD, who is currently a Rady School MBA student.

The Triton Innovation Challenge, now in its sixth year, is a business competition focused on fostering creativity and bringing to the spotlight commercially promising, environmentally focused technologies generated by the finest minds at UC San Diego. Supported through the generosity of The William and Kathryn Scripps Family Foundation Inc., the program is presented through a partnership of the Rady School of Management, Scripps Institution of Oceanography, and the Jacobs School of Engineering.

This most recent competition awarded cash prizes totaling $20,000 to support new and innovative ideas that relate to the environment (comes from, inspired by, or directly impacts nature.)
Posted by Daniel Kane at 5:10 PM No comments: