The UC San Diego Biomedical Engineering Society hosted its seventh annual Lab Expo in January, drawing upwards of 800 attendees and featuring research from more than 60 labs from a variety of disciplines across campus, including anthropology, electrical and computer engineering, bioengineering and more.

Keynote speaker Grant Sanderson, a math educational Youtuber with 1.6 million subscribers, drew a large crowd while talking about his approach to communicating math more clearly. Sanderson, better known by his Youtube channel’s name, 3Blue1Brown, developed his own mathematics visualization programming library to help viewers get a more intuitive grasp on abstract math concepts like neural networks and the Fourier Transform. He thinks that his visualization-first approach has merit.

“By focusing on clarity of communication, it makes you think more clearly about what it is you’re doing,” Sanderson said. “Whatever piece it might be, if you think about how you present this to an audience, it will shape your own understanding of the context, rather than letting communication be an afterthought.”

A research poster presentation and the keynote speech were just the tip of the iceberg. What better way to practice communicating science than to have graduate students pitch their research in only five minutes?

Only one could come out on top: judges picked Andrew Shibata, a first year cognitive science graduate student, as the winner. Based on his experiences listening to the myriad accents and voices in California, Shibata’s research aims to develop a database of voices characterizing the San Diego region, and study how people’s voices change the longer they live in San Diego.

Next up, the Biomedical Engineering Society is hosting their annual Translational Medicine Day on March 6. This event aims to bring together the research and healthcare communities-- including students, faculty and industry-- to bridge the gap between bench and bedside. More information can be found here: https://bmes.ucsd.edu/events/translationalmedicine.html

Posted by Katherine Connor at 12:29 PM No comments: 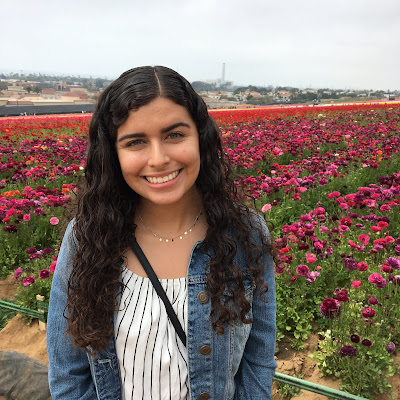 “My first year, I wasn’t involved in anything at all,” she said. “I came in and thought I’m just going to get on top of studying and get used to school. That was the worst decision I could have made and I really regret it.”

It’s hard to image that, since Villalobos is now the president of the Society of Women Engineers (SWE) at UC San Diego, helped found the Anita Borg Leadership and Engagement (ABLE) outreach program, is a student worker organizing educational camps at the San Diego Supercomputer Center, and is an undergraduate researcher in Professor Tara Javidi’s lab.

“I met so many new friends through SWE and I felt so much more supported than when I was alone trying to figure out college by myself,” Villalobos said. “You just have to take that first step. If you’re just going to class and going home, there’s not much growth that will happen because you’re not getting out of your comfort zone.”

Villalobos grew up in Chula Vista, twenty miles south of UC San Diego. Her mother and father—who is also an electrical engineer-- immigrated to the United States from Mexico for her father’s job before she was born. The engineering mentality that she saw in her father convinced her that this was a field she was interested in.

“What appealed to me about engineering is if something would break around the house, or the garage stopped working, he would never call anyone to come fix it-- he’d be the one to fix it, and he’d ask if I wanted to help. That’s what got me into engineering, was seeing how applicable it was to everything. That if anything broke, he’d say ‘Oh I can fix it.’ I really liked that mindset and that’s what appealed to me with engineering.”

Her decision to choose electrical engineering for her major wasn’t so decisive. That’s why she enjoys devoting time to outreach efforts that help high school students learn more about what specific majors entail.

“I ended up really liking electrical engineering, but going in I know I didn’t know what I was getting into. That’s why now through SWE, outreach is my favorite part of what we do because we’re able to talk to high school girls about what we do in our majors, what goes on in our classes, and they can explore different majors.”

In addition to her role with SWE, Villalobos is an undergraduate researcher in Javidi’s electrical engineering lab, working on path optimization for drones. The goal is to be able to give a drone a starting point and end point, and have it figure out the most optimized travel path. Their current application is for farmers who use drones to check on their livestock and crops—instead of the drone finding the target object and then landing, the team is working to be able to dispatch the drone, have it check on the object of interest, and then return to its home destination, all on its own.

In addition to finding a group or community to get involved with, Villalobos has one other piece of advice for current and future engineering students: find time for yourself.

“That’s something I always try to work on, because you have a lot of things in your day but there’s also a time where you need to breathe and relax and take a step back,” she said. “Take a moment. I would say for me at least it was about not going for everything all at once and piling a bunch of stuff on. Little by little you take steps, but you just have to make that first one.”


Posted by Katherine Connor at 1:30 PM No comments: 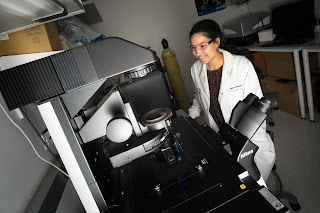 Posted by Katherine Connor at 3:58 PM No comments:

Seeing at a different scale 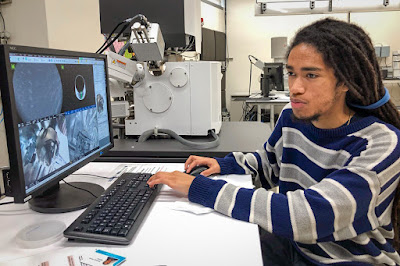 When he was in high school and building robots, Marquez Balingit couldn't help but wonder: How do these parts work and how do circuits communicate with each other?

He realized is questions could be answered in one word: nanoengineering. So when it came time to pick a college major, that's what he chose. He wanted to understand what things at the nanoscale or submicron level look like.

Now an undergraduate the Jacobs School, Balingit tackles this question at the Nano3 lab. In the future, Balingit sees himself creating a nonprofit company specializing in a form of energy conversion, battery or generator that is efficient in every aspect: cost, power conversion and practicality. He hopes that it can be free and practical for developing countries, giving them more autonomy so that they can power themselves.

Balingit says he is inspired by the works of Nikola Tesla. From his perspective, Tesla's main desire was to create free energy by harnessing and manipulating existing energy on earth and within the air so that everyone can access it.

Balingit teaches  users unfamiliar with the scanning electron microscope, or SEM, how to use it independently. Unlike regular optical microscopes, SEM does not use photons. Instead, it uses electrons, which allows the device to capture smaller features at the 1 micron scale, approximately ⅕ the size of a human red blood cell.

"I like the idea of being the bridge of information by gathering some knowledge, filtering out the details and explaining it to someone clearly," Balingit said. "I learn how to use high tech equipment and understand the standard operating procedures to be able to articulate that to other people so that they can use it on their own."

Outside of training users, Balingit also works on service measurements of sample materials, in order to to figure out the features that users want. He says he feels challenged to get a clear, high resolution images and excited to see something he's never seen before.

"Sometimes things I see in textbooks, I end up actually imaging which is pretty amazing because I never thought I'd be able to. In my textbooks, a lot of things are in the 10 microns and 5 microns and I wondered how they even get these images. Now, years later, I'm getting images that are roughly similar to that," Balingit said.

The Nano3 lab is also looking to increase outreach with the SEM by remotely connecting with high schools and community colleges to show them the SEM's  full capabilities of the and what it can provide from an educational standpoint. Balingit feels like this will help bridge the gap between college and high school curricula in nanotechnology by bringing this information to them. By magnifying everyday objects like pennies and ballpoint pens, Balingit also hopes that using SEM will inspire young students to pursue an  education/career in a STEM field.

Posted by Ioana Patringenaru at 10:46 AM No comments: