This year, a new student organization has been rapidly gaining momentum at UC San Diego: the Association for Computing Machinery (ACM).


ACM’s Fall Kickoff, which was held on Sept. 29 at Price Center East Ballroom, attracted a whopping 500 students, with the line spanning from the ballroom entrance to Library Walk. In the first month since its launch, the club has also hosted over 15 professional and social events.

“Our events are geared towards the field of computing and there's so many different areas we hope to explore, including software engineering, as well as mobile app, web and game development,” Nguyen said. “We also host a variety of social events to build a community so that everyone can get to know each other.”

He got the inspiration to start ACM at UC San Diego in January 2019 after stumbling upon UCLA’s chapter, which started four years ago and boasts a membership of over 1000 people. In the subsequent months, Nguyen and several friends teamed up to start a chapter at UC San Diego.

Before launching the club, the group met over the summer to think of ways to differentiate ACM from the abundance of engineering organizations on campus; one important aspect was how to define membership.


“I remember as a first- and second-year student, I joined some clubs and people would ask me ‘Are you part of this club?” Nguyen said. “And this was hard for me to answer because I just show up to events and many clubs really don’t define what it means to be a member.”

Vice President of Membership Kendall Nakai, a second-year computer engineering student, explained that the chapter prides itself on being member-centric and has a membership portal where students can track their progress within the organization.

“We wanted members to have a way to know how far they’ve come in the organization,” Nakai said. “By showing up to events, members can get incentives, such as priority access to networking events. I think it’s important to reward the people who consistently show up to all events.”

Unlike most student organizations, which use Slack as their main method of communication, ACM adopted Discord, a text-messaging platform popular in the gaming community. Nguyen said that this choice was deliberate, as the club hopes to develop more personal connections with its members.

“Discord is a big reason for our success,” Nguyen said.  “By summer we had over 100 incoming first-years who hadn't even started school on our Discord. Nowadays, the discord is used on a daily basis; people play games with each other, give career advice and just talk about life.”

Nguyen also attributes the large turnout to the club’s advertising efforts. The team branded itself as part of “the largest computing organization in the world” and distributed flyers across campus. He added that having the entire executive board well-connected within the engineering community gave them a tremendous advantage.


“Having connections before starting your organization is extremely important,” Nguyen said. “The moment we launched our kickoff, we sent personal invitations to our event page on Facebook. It's like a giant chain effect; people start pressing ‘going,’ and then their friends on Facebook will see it too.”

Nguyen stressed the main benefit of ACM is that it’s tied to an international organization, introducing students to a large, diverse network of people.

“Having a strong network is what gets you jobs at companies, big or small,” Nguyen said. “We can give students connections that otherwise might be harder to get from other clubs.”

Posted by Katherine Connor at 8:11 AM No comments:

“As a MEMS practitioner for almost 30 years, I fully understand the need to focus at the device level to ensure that the MEMS design meets SWAP (Size, Weight And Power) and other requirements,” said Albert P. Pisano, Dean of the UC San Diego Jacobs School of Engineering. “But I truly believe that MEMS designers must learn to think more about subsystem and system issues, since the future of MEMS will be won by those who cannot only design the device right, but who can design the right device. By taking a much more market- and system-oriented approach to MEMS design thinking, companies in this industry will realize greater success.” 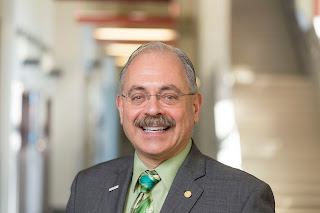 The Q&A was put together in advance of Pisano's October 24 closing keynote presentation, MEMS and Systems in the Digital Future, at MEMS & Sensors Executive Congress, October 22-24, 2019, at Coronado Island Marriott Resort & Spa in Coronado, Calif.
Posted by Daniel Kane at 4:08 PM No comments: