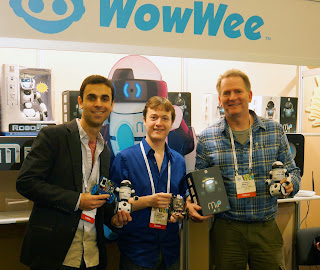 A toy robot created by Jacobs School engineers and Hong Kong-based toymaker WowWee was all the talk at the Consumer Electronics Show in Las Vegas last week.

MiP (short for mobile inverted pendulum) was named a Product of the Future for 2014 for Popular Mechanics. It also earned an award for Envisioneering, Innovation and Design and was a finalist at CES' Last Gadget Standing Competition.

The WowWee MiP is a charming, two-wheeled Segway 'bot that has some impressive balance.


The robot is the brain child of toy designers at WowWee and a group of graduate students in the Coordinated Robotics Lab here at the Jacobs School, which is led by mechanical and engineering professor Tom Bewley.

"It was a bit overwhelming at first but an exciting experience, at least for me personally, to be a part of the release and to help promote MiP at the WowWee booth," said Saam Ostovari, who was the lead graduate student on the MiP design. "It was a non-stop flux of press, suppliers and consumers wanting to learn about MiP. I still haven't recovered my voice from all the talking I did."


See below for a video of MiP in action.