Making Buildings Safer During an Earthquake 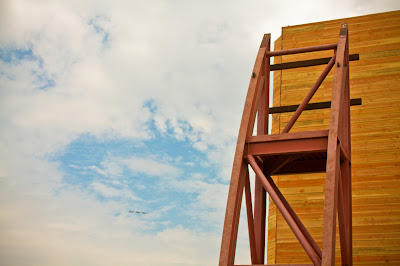 Drivers heading north on I-15 around Pomerado Road might have noticed a four-story wooden structure standing tall on the right side of the road. These drivers do not know it, but they're actually looking at a complex research project designed to test structures known as soft-story woodframe buildings, very common in the San Francisco Bay Area, among other places.They also don't know that they're looking at the largest outdoor shake table in the world at the Englekirk Center at the Jacobs School.

About 25 percent of soft-story buildings are expected to collapse during a large earthquake. These buildings typically have large openings on the ground floor, making the first story weak and likely to lean or fall over during earthquakes.

During the first phase of testing, researchers retrofitted the four-story building with cross-laminated timber on the first floor. The tests were successful, and the retrofit allowed the building to remain standing during a shake when it normally would have collapsed.

The tests were filmed by a documentary crew from a prestigious public television science show. Stay tuned for updates on air times.

Email ThisBlogThis!Share to TwitterShare to FacebookShare to Pinterest
Labels: photo of the week