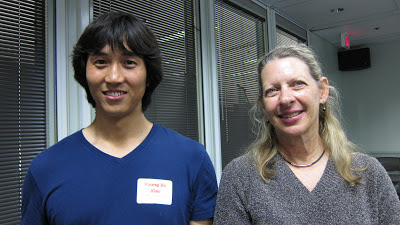 Young Jin Kim, who is affiliated with Sixth College, who was nominated for the Undergraduate Library Research Prize by Joanna McKittrick, a professor of Mechanical and Aerospace Engineering. Young Jin's research project focused on designing and building a spray pyrolysis stem to produce luminescent powders for application in solid state lighting. McKittrick first hired Kim to work in her lab after he approached her with a proposal titled "I Want to Work in Your Lab," in which he explained his fascination with materials science. That initiative clearly made him stand out, as did his research subsequently.

"When Young Jin started this research, he knew nothing about solid state lighting or luminescent materials and I was impressed with his independent research into these topics," said McKittrick. "To develop this new method to synthesize particles, he needed to conduct some background research. He independently, and without my prodding, learned to use the vast library resources available to us on the campus. He has looked up papers on his research, read textbooks to understand the principles of spectroscopy and x-ray diffraction, and learned to use the JCPDS files in the library. I am truly astonished that he keyed onto the importance of using the library in this area of research; he has definitely surpassed some more senior graduate students in his research approach."

In selecting Young Jin for 2nd Prize, the jury was most influenced by the fact that he employed research methods not used before in McKittrick's lab, and as a result, he was able to set up experiments based on detailed descriptions he found in journal articles; previously, experiments were based on methods already in use in the lab. This demonstrates how critical the information resources he delved into were to his actual research, at every step of the process.
Posted by Daniel Kane at 8:59 AM